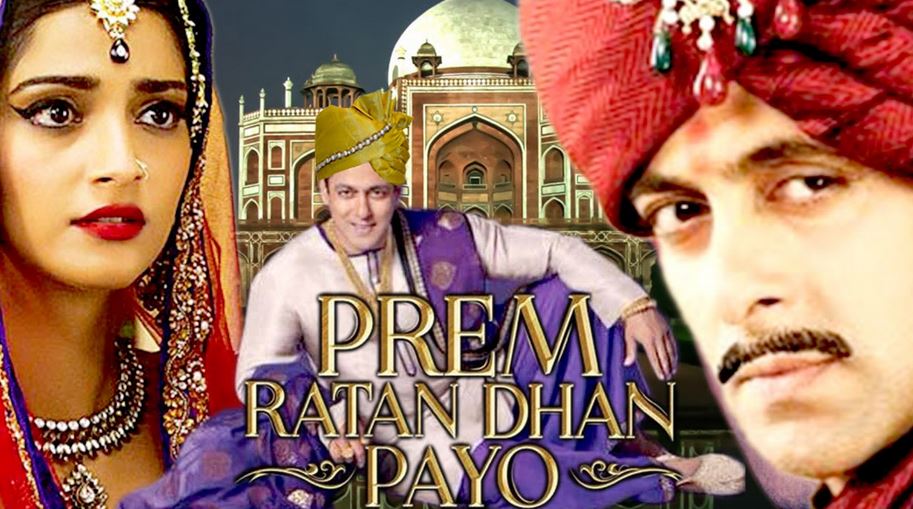 Rajshri  is the Bollywood banner synonymous with family values, as has been proved by the movies like “Maine Pyar Kiya”, “Hum Aapke Hain Koun” and “Hum Saath Saath Hain”, and “Prem Ratan Dhan Payo” comes as the next link of the chain. But alas…..the India audience has changed now, but the biggest part of the film of course, is the Salman “Prem” Khan factor, which is taking it high on the wave. Even if the film seems to belong to another period and is much under the intelligence level of the current Indian audience, the movie is doing well thanks to the impeccable Salman Khan-Sooraj Barjatya combination. Others in the star cast are Sonam Kapoor, Armaan Kohli, Neil Nitin Mukesh, Swara Bhaskar, Anupam Kher and Deepak Dobriyal.

“Prem Ratan Dhan Payo” is a story based in Ayodhya, where Prem Dilwala (Salman Khan) works in Ram Leela, portraying Lord Rama and has the essence of his character too. He falls for princess Maithili (Sonam Kapoor), for whom he manages to find entry into the royal family of Devgarh Fort. The story behind the welcome entry of Prem in the royal family is that he is a lookalike of the would-be king Vijay (also Salman Khan). Here is the tale of an unhappy, lonely prince with a jealous step brother and step sister, played by Neil Nitin Mukesh, Swara Bhaskar and Aashika Bhatia respectively. So enter Prem with his friend Kanhaiya (Deepak Dobriyal) and taking the family back to its values with all his virtues and goodness that emulate the Ramayana. Anupam Kher is cast as the loyal Diwan of the royal family while Armaan Kohli is the bad man, joining hands with Neil to oust the prince.

Salman Khan has once again proved that he has all the ability to breathe life into the lifeless and this is what he has done with “Prem Ratan Dhan Payo” (wiki). The movie could, however, have done without Sonam Kapoor who seems to have worked just too hard before fitting into the character of the virtuous princess. Other actors are mediocre in their performances too but the basic problem is with the script, which is just running along the beaten track rather than giving them the chance to do something new. Sooraj Barjatya has failed to realize that the expectations of the audience have transformed since the HAHK era and they are looking for sensible cinema, rather than sugar coated romance and family values. Still, “Prem Ratan Dhan Payo” is riding high on Salman’s shoulders!

“Prem Ratan Dhan Payo” released on the auspicious occasion of Diwali and has made the best of this timing, with a smashing start of Rs 40.35 crore on its first day, just a day after Diwali. The second and third days bagged Rs 31.05 crore and Rs 30.07 crore respectively. The movie created a record, surpassing a collection of a phenomenal Rs 150 crore in just first 5 days, and reaching that of Rs 165.43 crore in the first week after its release.