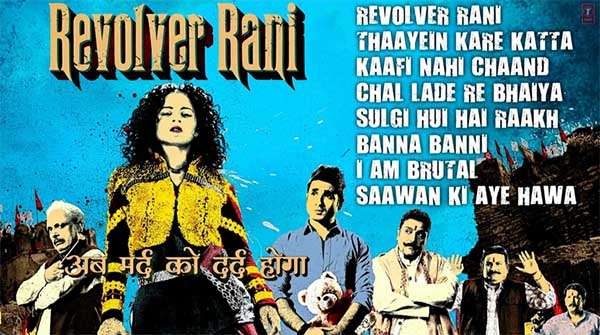 Kangna Ranaut is all set to rule the box office again with her upcoming film Revolver Rani. Her recent movie Queen was widely appreciated by the audience and also received a good rating from the critics. Revolver Rani is a unique love story that is set against the political background. The curly hair actress plays the role of AlkaGujjar the leader of a political party who falls in love with Vir Das (Rohan Mehra).

When you hear Chambal, the first that comes to our mind is the land of guns, politicians, rebels, bullets, and blood. Revolver Rani is based on this hostile land where friendship has no place. You only get to see deadly enemies and fragile alliances who are just waiting to kill each other.

The story moves further with Alka’s reign coming to end who lost the elections at Gwalior to her opposition Tomar Party. It seems that the election fever has reached Bollywood who are taking the concept of politics seriously and portraying in their films. Well, it will be a fun movie to watch based on the politics at the peak time of elections.

Let’s move ahead, the power is now in the hands of Tomar party which has put behind Revolver Rani. Their aim is to hurt Alka and they kidnap her lover boy from Mumbai and bring him to Gwalior to kill him. Just when the oppositions are set to kill the actor, his lady love Revolver Rani comes for his escape. She triggers the gun to save her love and life. This interesting rivalry between the two parties has been showcased with a thoughtful process.

Moreover, the music seems to be interesting and the title track Revolver Rani that is sung by the famous singer UshaUthap has already been applauded. This song has that typical and strong flavor of 60s to steal the heart and the usage of saxophone can be noticed. The lyrists Puneet Sharma said that this song perfectly fits the pop singer and her passionate and deep voice keeps you hooked up until the end.

It is a simply love story that shows the consequences of a big politician falling in love with the Bollywood star and how the enemies target him to hurt Revolver Rani. Guns, bullets, and ailing sounds can be heard at the background throughout the movie. The dark comedy at the iconic climax in the Shivpuri Bird Sanctuary seems to be perfect location for the film.

When talking to Kangana on her preparations for such challenging role, she said that she had been taking lessons on using a revolver and how to hold it right to bring that tough looks and perfect grace. The writer director Sai Kabir has been brave enough to create a movie based on such concept. Movies with such political background and filled with action are less liked by the viewers, so the risk is high. Above all, we can wait for the movie to release on 25th April and know where it stands at the box office.