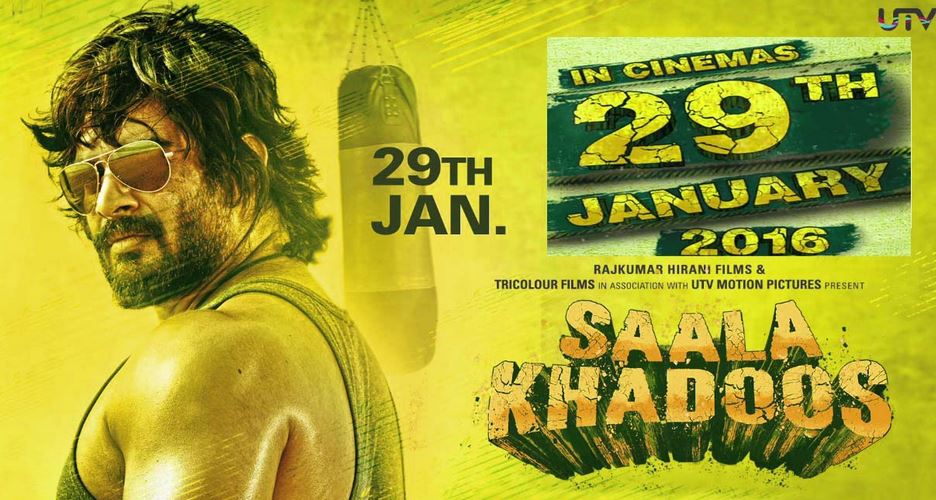 “Saala Khadoos” is another sports based movie to have made it to the silver screen after the raving success of “Chak De India” and “Mary Kom”. The movie has a mixed star cast with the veteran actor R Madhavan playing the male lead, while the female lead is etched by the new comer actress, Ritika Singh, who is a real life boxer. The others in the star cast include Nasser, Mumtaz Sorcar, Zakir Hussain and M K Raina. “Saala Khadoos” has been directed by Sudha Kongara. It was released on 29th January 2016, pitted against the Sunny Leone starrer sex comedy called “Mastizaade”.

The plot of “Saala Khadoos” revolves around the association between a boxing coach and his prodigious find, a fiery young girl who wishes to reach the top. R Madhavan stars as Adi Tomar, a national level boxing coach who is pushed out of his Delhi position by another corrupt and vicious one, played by Zakir Hussain. Adi is posted in the South, in Chennai, where he comes across a young and talented boxer called Madhi, played by Ritika Singh. Madhi comes from a humble background and she is supported by her elder sister, played by Mumtaz Sorcar. When the typical national level boxing coach meets this foul mouthed South Indian boxing gem, a fiery combination seems to be in the making. Their relationship gyrates between that of a guru and shishya to that of this young girl trying to seduce her coach. The script is very fresh, which is the plus point of the movie.

The vibrant performance of R Madhavan as an angry middle-aged boxing coach resembles the role played by Shahrukh Khan in “Chak de India”, though he sometimes seems to be even better. In fact, “Saala Khadoos” can be regarded as one of the best performances of the seasoned actor till date. It seems that he has completely sunk into the character of Adi Tomar, whether it is physically or emotionally. Both the young newcomer girls show true potential and their rawness perfectly complement the experience of Madhavan. All the others in the star cast have been good enough in their roles. The movie has its explosive moments but the director’s intention to play safe makes it dull at times. Its length is another flaw of the movie, though it hardly loses the grip overall and continues to keep the audience interested from the beginning till end. The editing as well as cinematography excels, with the expressions of the angry coach Madhavan captured to perfection.

“Saala Khadoos” is a performance oriented movie with an unusual subject and this one has brought a good deal of appreciation for Madhavan. But the fact is that its box office run has not been so impressive. The first day collection at the box office has been only Rs 1.28 crore, while it could garner only Rs 2.09 crore as its second day collection. The film was released simultaneously in Tamil, where it made a collection of Rs 91 lacs on the first day and Rs 1.45 crore on the second day. A probable reason of the low collections of the movie at the box office could be that it was released along with “Mastizaade”.