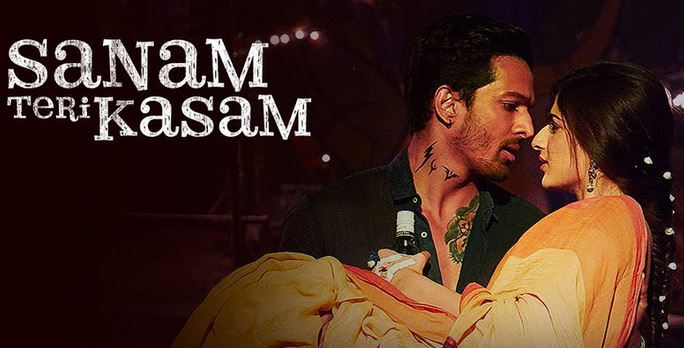 Sanam Teri Kasam is one of the releases this year from Eros Now that has minimal star cast but relied on the script as well. The movie featured Harshvardhan Rane and Pakistani Actress Mawra Hocane in the leading roles. The romantic drama is set for the eternal love concepts and was released on 5th February, 2016. The movie is directed by Radhika Rao and Vinay Sapru. Deepak Mukut produced the movie under the banner of Eros Now.

The movie revolves around Inder (Harshvardhan) and Sarswati (Mawra) who are happened to be neighbors. Sarswati is a sober girl and works in library but later she wanted to get transformation for her family and to get married. She comes in contact with Inder whose girlfriend is a stylist. However, Inder’s girlfriend misunderstood the relation between Sarswati and Inder and things fell out. However, Sarswati brought Inder at her home to treat his injury but her family disowned her for adultery. In between all these, they fell in love but due to family pressure Sarswati agreed to marry Abhimanyu. She ultimately rejects him as well and went missing after intimacy with Inder. Later Inder came to know that she has brain tumor and she was little time left. Even after many objections from Saraswati’s family, they got married. But, Sarswati dies on the very day. They burry her as per her wish beneath a tree and Inder expresses his eternal love for Sarswati. The movie finishes with the sorrow note of love from Inder who changes himself for the sake of her love and waits for her on the other side of the world.

Harshvardhan and Mawre both gave commendable performance considering they are still very new to the industry. However, not so engaging script gave them little option to increase their horizons. The songs and the sequences however were pretty apt and good and that made the movie interesting sometimes. However, the movie is all about Harshvardhan and Mawre and they have tried their best to ensure that they engage with the audience. The acting and the energy were good from all the actors but little more would have done the trick for the movie as well. The storyline remained pretty complex and that affected the overall performance as well. The narration of the movie was the biggest lack in the overall performance of Sanam Teri Kasam.

Sanam Teri Kasam was a small budget movie and it opened with good number of screens. The lack of marketing and promotional activities did not give the movie the perfect start. However, the love story attracted good amount of audience on the opening day and earned close to INR 1.25 Crores. However, the word of mouth gave the movie good boost and it collected around INR 4.66 Crore on the weekend. Overall, Sanam Teri Kasam earned around INR 9 Crore on the first week. The movie was declared an Average at the Box Office as per the collections.