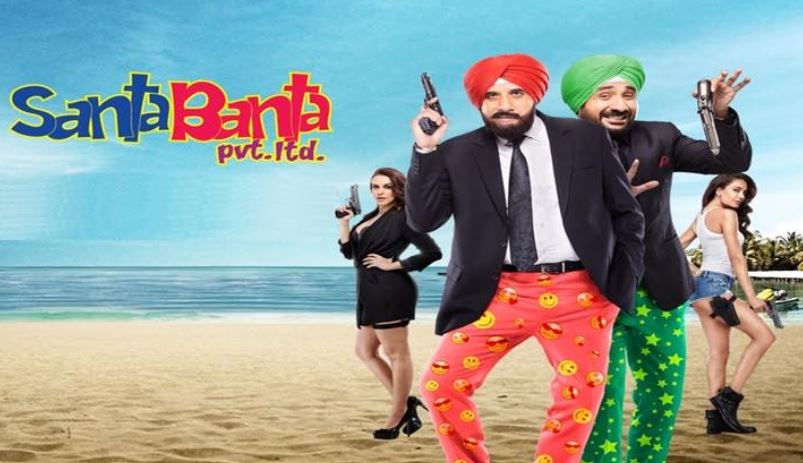 Santa Banta Pvt Ltd is a Hindi Movie released worldwide on April 22nd, 2016. The movie based around two best friends and is recreate the magic of two branded comedy names in India Santa and Banta. The movie featured Boman Irani and Vir Das along with Neha Dhupia, Lisa Haydon, Johnny Lever, Sanjay Mishra, and Vijay Raaz in lead roles. The movie was released under the banner of Viacom 18 and is directed by Akashdeep Sabir.

The movie revolves around the stupidity of two best friends Santeshwar Singh aka Santa (Boman Irani) and Banteshwar Singh aka Banta (Vir Das). They have potraryed as two stupid friends and their adventure has been shown in the humor. The High Commissioner of Fiji Shankar gets kidnapped and RAW comes into huge pressure for the same. They seek for their secret agents who are also known by the code name Santa Banta. In the due course, Agent Arvind (Vijay Razz) found Santa and Banta (Boman and Vir) and decided to send them for the rescue of Shankar. They come across wife of Shankar (Neha Dhupia) and Cutie, RAW agent in Fiji (Lisa Haydon) as well. The saga continues as they get chased down by Nepali Don (Johnny Lever). They potrary the RAW Agent Santa Banta and make messes all around. The movie has no consistent and systematic story telling that can be developed as a good plot.

The story and the script is nowhere near to senses and the movie can be considered pathetic. Poor direction and narration make the movie even worse. Apart from Boman Irani and Vir Das, none other is impressive in the movie. The music of the movie is loud and senseless as well. The movie features the actors who are immensely potential and are considered best for the comedy roles. Actors like Sanjay Mishra, Vijay Raaz, and Johnny Lever are known for their skills. However, it looked like the director wanted to make a movie out of SMS and it was nowhere near to a perfect story. All of the punches and the jokes were unfunny and the movie has done total injustice to the Santa and Banta. The movie was a total mess itself with nonsense dialogues and poor jokes.

The Box Office Collection of Santa Banta Pvt Ltd is equally frustrating for the producers. The movie has got the brand name but poor direction made it worse and it was a total washout after the first weekend. The movie has net income of around INR 50 Lakhs and has been rated as Disaster in Box Office. However, adding insult to the injury, the movie was banned in all across the Punjab State. The movie has allegedly portrayed Sikh Community and was banned. The movie could not even stand in the Box Office due to the poor story and performance. However, the other big release Baghi also took away business from the movie along with still red hot The Jungle Book.