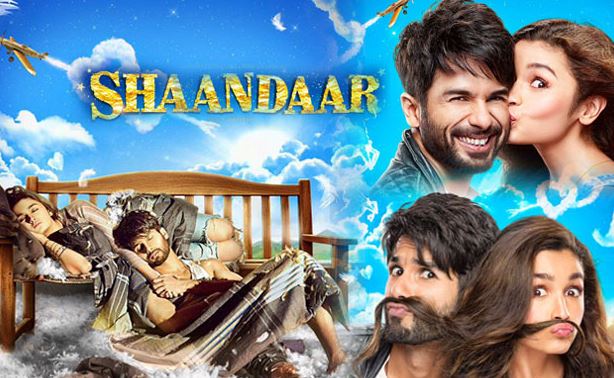 “Shaandaar” is a much publicized Bollywood release which has the sizzling chemistry of Shahid Kapoor and Alia Bhatt as the top attraction. The film boasts of an impressive star cast, including the likes of Pankaj Kapoor, Sushma Seth, Sanjay Kapoor, Diljit Dosanjh and Sanah Kapoor, the step sister of Shahid Kapoor and daughter of Pankaj Kapoor. The romantic comedy is woven around the wedding theme, and has a great deal to offer when it comes to entertainment and technical effects. It comes as the next flick of the director of the phenomenal hit “Queen”, which elevates the expectations from the movie. “Shaandaar” was released on 22nd October, on the occasion of Dussehra.

“Shaandaar”, as the name suggests is all about grandeur and magnificence, as it covers the perfect English wedding between two rich families, rather than a boy and a girl. The wedding is to take place between Isha (Sanah Kapoor), the daughter of Bipin (Pankaj Kapoor) and granddaughter of the cold hearted Mummyji (Sushma Seth), and Robin (Diljit Dosanjh), the younger brother of the wealthy Sindhi tycoon Harry Fundwani (Sanjay Kapoor). The wedding arrangements are being looked after by the handsome wedding planner Jagjinder Joginder, who is being played by Shahid Kapoor. It becomes the event of a lifetime for him and Alia (Alia Bhatt), the adoptive sister of the bride, as romance blossoms between the two, right here. Alongside the romantic plot runs the bizarre story of the rather rotund bride and the uncaring groom, both of whom are trapped into this arrangement just to satisfy the wills of their exaggerative families.

Though “Shaandaar” is a visually enchanting movie, there is nothing much coherent beneath the surface and the director has failed to recreate the magic of “Queen”. The performances are however, very refreshing, as far as Alia Bhatt and Shahid Kapoor are concerned. They make a cool pair with hot chemistry. Sanah Kapoor makes the surprise package of the movie as she looks both, graceful and charming and excels at the acting front too. Karan Johar is seen in cameo and his scene appears hilarious. Pankaj Kapoor is a seasoned actor who can handle all kinds of roles pretty well, while the remaining star cast has also been good enough. The problem actually lies with the handling of the movie as some scenes seem to be useless and exaggerated, making the movie seem bizarre and inconsistent in some parts. Overall, “Shaandaar” is a charmer without much of a purpose!

The film was released on the chosen occasion of the festival of Dussehra, so that it could capitalize on the festive holiday and it made a great collection of Rs 13.10 crore on its first day. The collection dipped to Rs 7.55 crore on the next day, making a total of Rs 20.65 crore in the first two days. A great promotion strategy has played an important role for the movie. The collection is nothing less than impressive, yet it seems that Vikar Bahl has lost his touch after a superb film like “Queen”.