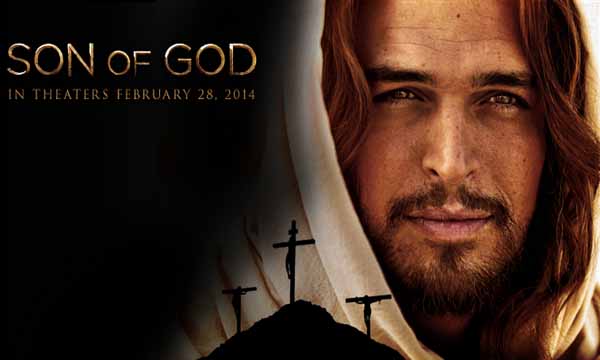 Those who watch The History Channel must know about a miniseries that was premiered last year with the name “The Bible”. Son of God could be considered as a section of this series which basically focuses on the life of Jesus Christ. The film has been directed by Christopher Spencer and has Diogo Morgado, Louise Delamere and Amber Rose Revah in the lead role as Jesus, Claudia and Mary Magdalene.

The movie takes the viewers through the life of Jesus starting from his birth in the barn, till the gathering and march to Jerusalem with his followers including all the miracles that he did in his lifetime. The film could also be taken as a great hit montage. The movie is sure to delight the viewers watching Jesus walking on water, multiplying fishes and loaves and raising Lazarus after his death. One of such most delightful scene in the film is when Jesus approaches fisherman Peter, who has been loading up his small boat in the Sea of Galilee, and Jesus approaching him smiling like peter has some sort of secret hidden within him. Peter tells Jesus that there are no fish in the sea and Jesus runs his hands over the water smiling, and Peter’s net is fully filled with fishes. These party magic tricks could be seen through the film which makes the crowd sigh “Ohhh!”. As the movie progresses, one could see the followers increasing at an exponential rate and same is the case with its critics. Also at the same time Jesus threatens high power officials including the highly ranked Jewish priests as well as the Roman rulers of Jerusalem.

Son of God was released all over in 3090 screens and grossed and made the 3 day cumulative of $29.8 Million dollars which gives a per screen average sales of $9345 in the first week. Although the movies has been filmed in a blockbuster epic way, with a lot of Quaich cuts, HD photography, Repetitive CGI shots etc. but was taken down by a really non-powerful script.

The film becomes very interesting at the time when the focus is made on Roman politics played at that time as well as what being occupied meant for all the Jews. The main problem of the movie could be said that the Jesus coming off as a cipher. He has been portrayed as the gentle one like coming out of the school books. The movie was expected to bring a lot of interesting facts as well as unknown stories of Jesus’ life but opposite to that it has been delivered to the users very casually which made it very difficult for other to believe that a simple man wearing a white dress could threaten the whole roman power and high ranked officials to such an extent that he is cruelly crucified in front of his followers. In spite of all these facts the movie is a onetime watch and for simple entertainment for those who have a bit of interest in Christianity and Bible.