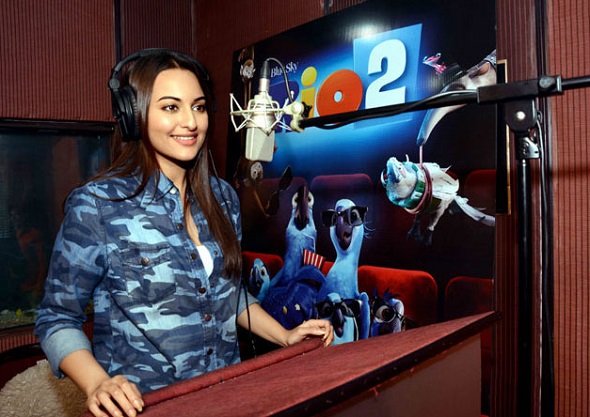 Bollywood Actress Sonakshi Sinha is in news for she has not only just dubbed but she has given her sweet voice to sing a few lines for Hollywood family entertainer “Rio2″ which is to be released in next month. The multi talented Actress has lent her voice for Hindi dubbed movies. Even Imraan Khan has lent his voice for another character. Sonaskhi has given her voice to a character called Jewel, a macaw. Sonakshi experiences to sing a few lines for party sequence in themovie ” Rio 2″ and she enjoyed dubbing in the film. Sonakshi mentions that her character and Imraan’s character are so perfect for the role of Blu and Jewel. In this state, she presents her feeling of being extremely happy. “Dabangg” girl expresses that there is a scene where Jewel dances and sings. For that, Sonakshi was given to sing a song. She wants to sing more but she has got just few lines for the movie. She even adds she is just a bathroom singer. The English version of the movie was voice-over by Anne Hathaway and Jesse Eisenberg. “Rio 2” is an adventurous comedy movie, which is shot in Brazilian city of Rio De Janeiro. It is 3D movie which is to be released in English, Hindi, Tamil and Telugu.