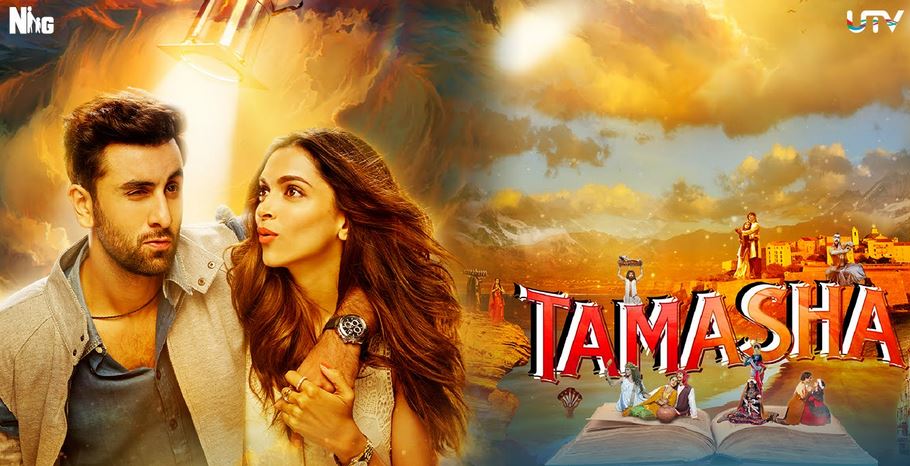 Ranbir Kapoor and Deepika Padukone had once been undoubtedly the hottest couple in Bollywood but their breakup ended the story a few years ago. However, it has hardly affected their on screen chemistry, a fact proved by “Yeh Jawaani Hai Deewani” and now their latest “Tamasha”. This romantic drama has been directed by Imtiaz Ali and is a Ranbir-Deepika spectacle all the way, from the beginning till end. The movie was released on 27th November 2015 and has been expected by the audience to be a breath of fresh air.

“Tamasha” is the story of a young couple who meet during a holiday in the romantic island of Corsica. Ved Sahni (Ranbir) is a young boy from Shimla, who is in love with storytelling and is in Corsica to escape from the expectations of his father (Jawed Sheikh), who wants him to excel in the corporate world. Tara Maheshwari (Deepika) is a girl from Kolkata and her childhood love for the comic character of Asterix is the unusual reason that brings her on this amazing holiday. Tara plays the typical fairy tale prince in “Tamasha”, helping Ved break all the shackles that tie him and bringing out his true self, his true identity. The two have a blast on the holiday, pretending to be what they are not and ultimately, fall in love. Then comes the time when Tara has to leave and all she does while parting is give Ved a goodbye kiss. Four years later, she goes to Delhi searching for her lost love and finds him in the guise of a corporate manager rather than the carefree youngster she fell in love with. Once again, she helps him start the journey to rediscover his true self and they rediscover their lost love too!

“Tamasha” brings back the best of Ranbir Kapoor but in flashes because the story goes astray from time to time. On the other hand, Deepika is lost at times, but she makes up for it by being brilliant all through the movie. Imtiaz Ali has his expertise at dealing with complex stories but this one could have been made better. Aesthetically speaking, “Tamasha” is a feast for the eyes but the first half seems more like a documentary on Corsica. The real passionate self of the true couple hardly gets the chance to come out in this part of the movie, but the second half has them back at their best. Once again, they show that they have a natural chemistry between the two of them and this is what makes “Tamasha” worth watching at least once. The music is melodious and songs well placed through the movie. Only if Imtiaz Ali had worked a little more on the story line, “Tamasha” would have been more soulful!

“Tamasha” has been one of the much awaited releases of the year, especially because of the chemistry of the lead pair. It has done well enough to meet expectations, opening up with an impressive collection of Rs 10.94, followed by Rs 13.17 crore on Saturday and Rs 14.12 crore on Sunday. It has collected a total of Rs 47.37 crore in the first 5 day run and is expected to cross the 50 crore mark very soon. The worldwide box office collection of the movie stands at Rs 69.77 crore.