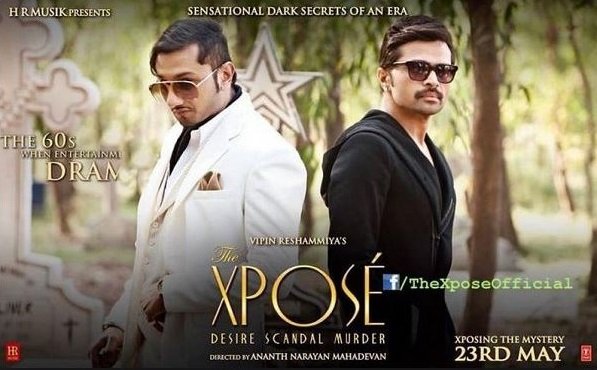 Set in the glamorous panache of Bollywood Film industry of the 60s, the film ‘The Xpose`’ is a musical thriller that was released on 16 May 2014.

The story revolves around the protagonist Ravi, who has been dismissed from Police Service after he kills a minister who infuriated and disrespected him. He walks off in frustration to join the South Indian Film Industry. The twists of the Bollywood melodrama start at an awards function. Zara terribly drunk, swears on Chandini, and accuses her of being a cheap whore who sleeps with her co-stars to get into films. Chandini is drunk as well and both end up in a catfight.

One of Zara’s co-stars, Ronnie also terribly high in the head, seconds the lie accused upon Chandini to confirm that he has slept with her the latter as well. At this juncture, Virmaan who is Chandini’s lover, leaves the setting when he hears Ronnie’s accusation which hurts Chandini way much more and she runs away from the setting as well, but in tears. Afterwards, Zara goes to freshen up upstairs where she meets KD. Both strike a heat and ends up making out on the terrace. But a little while later, KD upon hearing his wife coming upstairs, compels Zara to hide around, but Zara refuses bluntly.

This irate KD and in his frenzy he pushes her off the terrace and walks off thinking she is dead already. However, Zara holds onto the railing and happens to get a hand from Subba. But Subba lets go of her hand soon after holding it, purposefully to gain popularity for his flopped movie.

The police accuse Virmaan of Zara’s death when the crowds testify about their break-up the night before. Ravi Kumar enters here. He regards Virmaan as a treasure object of Chandini as she had loved him dearly at one point. To prove the depth of his devotion, Ravi helps to release Virmaan with the help of the underworld contacts that Ravi’s brother holds. Ravi solves the mystery brilliantly but learns the biggest lesson of his life with a missing piece of the puzzle. He finds that Zara had survived the fall and had been murmuring in her survival rant when Chandini had come across her in the early hours of the morning after. Chandini with the vengeance and revenge surging inside her, smashes the bottle in her hand onto Zara’s skull. Ravi learns to let the unjust be, as he is in love after all.

Anant Mahadevan has directed the film while the story and music is by Himesh Reshammiya and the producer is Vipin Reshammiya. Himesh is the protagonist of the film, while Irrfan Khan narrates the story. The film stars Himesh Reshammiya, Zoya Afroz, Sonali Raout and singer-rapper Yo-yo Honey Singh in a negative role.

The film was produced on a budget of 16 crores while the box office records state its collection as 11 crores and more, till date.
Critics, Taran Adarsh, Mehul S Thakkur, Subhash K Jha and Vishal Verma has rated it 3.5 with a stern applaud for the film’s visual appearance and the entertaining storyline.