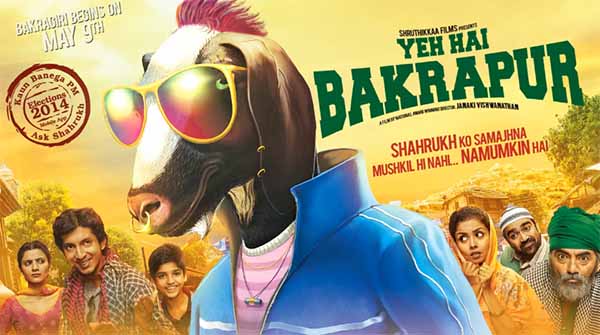 Bollywood promises to make your summer entertaining with its upcoming film Yeh Hai Bakrapur. This hilarious movie with an unusual title is bound to take you for a fun and roller-coaster ride of laughter and entertainment. It is a typically masala Bollywood movie. Just within the two weeks of the release of its trailer, Yeh Hai Bakrapur has already made a record with 1 million views.

Director Janaki Vishwanathan said that this is overwhelming response that we have received from the fans across the country. The story is about the Querishi family and their pet goat who shares his name with the Badshah of Bollywood Shah Rukh. The film’s posters that are put up across the city and available on Internet state that “Yahan Shahrukh mein RabDikhtahai”. This can be an interesting fact if whether the original superstar Shahrukh Khan will clear the release. According to the director, the film does not relate to the actor by any means and is a pure entertaining movie.

To avoid any miscommunication or mishap, producer Ramesh S Arunachalam will make an arrangement for special screening of the movie for the king of romance Shahrukh Khan’s manager and his core team. Besides, the team has offered their interest in seeing the movie before its release just to ensure that the heartthrob of million fans is not humiliated by any ways.

According to the villagers in the movie, the goat is not an ordinary goat but has got luck and fortune to the village and therefore is named after Shahrukh. The trailer also gives you a glimpse of comedy and laughter that is hold for the audience who will simply enjoy the movie without any stress or worries. You will see the Roadies hero or rather villan Raghu Ram along with the talented singers like Amit Kilam and Rahul Ram who were seen dancing around the lyrics.

Besides, the word Khuladi has been used several times in the video and it simply promises to be a hit in the near future. After watching the hilarious trailer, many people have commented as “Oscar winning movie” and a comedy Bollywood movie. The simple characters and location of the film makes it an interesting low budget film that is sure to grab the attention from the audience. People will be stress-free after watching the movie as the trailer promises.
The song Pair Anadi composed by the famous rock band Agnee has been released and is already gaining popularity with electrifying music and ear catching lyrics. With the election fire hitting the country, Yeh Hai Bakrapur will be a break from the ongoing election news.

This movie is set to hit the cinema halls on 9th May, 2014, a perfect time for release. The children will receive a rewarding break from their studies and dose of entertainment in their holidays. Well, get ready to book your tickets in advance to catch the first show if this masala Bollywood movie Yeh Hai Bakrapur.