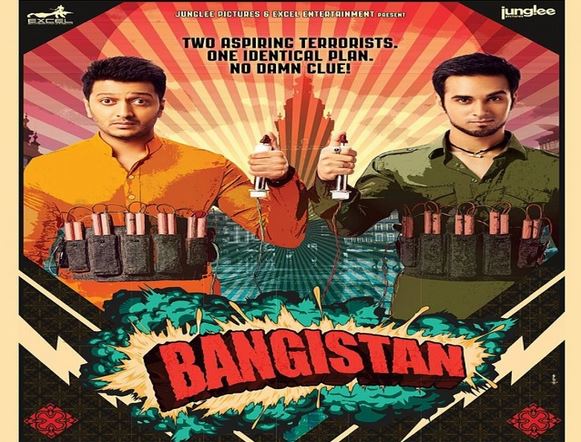 “Bangistan” is the latest Bollywood release in the comic genre, which hit the silver screen on 7th August, 2015. The movie is produced by Farhan Akhtar and Ritesh Sidhwani and is directed by Karan Anshuman. It stars Riteish Deshmukh, Pulkit Samrat, Jacqueline Fernandez, Arya Babbar, Kumud Mishra and Chandan Roy Sanyal in the lead roles. The movie explores the common topic of terrorism but has a different take on it, in the form of satirical comedy. The film was earlier set to release in April but the date was pushed back to August.

Riteish Deshmukh aka Hafeez Bin Ali and Pulkit Samrat aka Praveen Chaturvedi, both are the residents of the Southern and Northern part respectively, of a country called Bangistan. Actually, Bangistan is ravaged by the eternal conflicts between Hindus and Muslims. Both of them exchange their religious identities to be a part of a terrorist mission in Poland. While Riteish becomes Ishwarchand Sharma, Pulkit impersonates Allah Rakha Khan, both becoming suicide bombers to mar a peace conference to be held in Poland. Jacqueline Fernandez plays Rosie, a bartender in a Polish club and Chandan Roy Sanyal is Tamim, a Bangladeshi migrant who has now become a conning immigration agent. Both the aspiring terrorists reach Poland and start the mission by making DIY bombs. The plot moves ahead, with a great deal of comedy and confusion, as the two set out on this mission.

The movie “Bangistan” has a good star cast as well as a hilarious comedy but the weak performances and lack of grip over the subject has weakened it. Riteish Deshmukh is not his normal self in the movie and looks dismal at places, while Pulkit Samrat is a bit too chirpy. All others are also mediocre in their performances. The screenplay is the weakest part of the movie, as it has not been handled well enough to hold the audience. The director has attempted a satire on religion like “PK”, but has failed miserably in his attempt.

Call it the Khan factor or anything else, but “Bangistan” has failed to impress the audience, despite the antics of expert comedians, Riteish Deshmukh and Pulkit Samrat. The movie opened on 700 screens but was able to garner only Rs 1.05 crore on the box office, which makes a very poor opening spell. To make things worse, the situation did not improve over the weekend and all that it could collect over Saturday and Sunday was Rs 2.64 crore. This makes a pitiable figure of Rs 3.70 crore over the first weekend, which is sad news for a movie which worked hard over its promotional campaign and a catchy trailer. It has done a little better job in the metros like Mumbai and Delhi, as compared to smaller cities. In fact, the film does not show promise of improvement over the coming weeks as the box office is already being ruled by “Bajrangi Bhaijaan” and the movie “Bangistan” has nothing much to pull the crowds. The Hollywood movie “Mission Impossible: Rogue Nation” has also had a negative impact on the film.