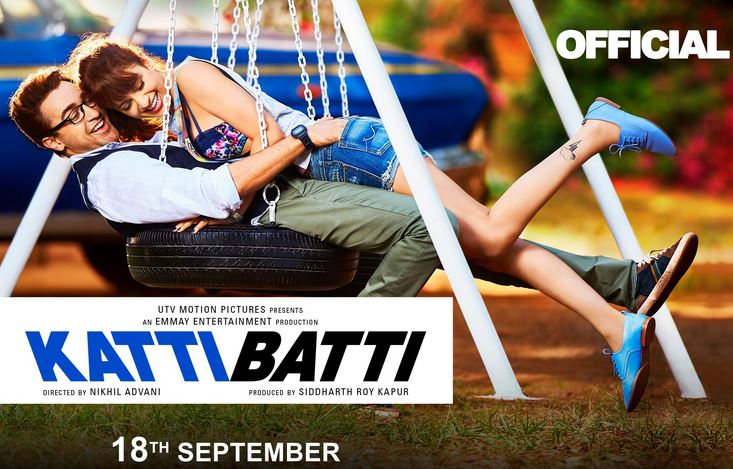 After the success of “Queen” and “Tanu Weds Manu”, Kangana Ranaut has become one of the most sought after heroines in Bollywood and the audience is in frenzy when a release from her is lined u. This time she is back again with a romantic comedy called “Katti Batti”, a film by Nikhil Advani, which stars her opposite Imran Khan who comes back to the silver screen after a long gap. The film is all about the ups and downs in a relationship and is a different take on romance. It was released all over India on 18th September, 2015.

“Katti Batti” is plotted around the love hate relationship of Maddy (Imran Khan) and Payal (Kangana Ranaut). The story begins with a flashback when Maddy, an architecture student falls in love with his college mate Payal and professes it to him. Payal does not want a serious commitment but Maddy woos her for a length of time, finally convincing her to go in a live in relationship with him. After the initial rosy period, they start realizing that they do not really love everything about each other and in the end, they decide to break up en route holiday to Goa, when Maddy leaves Payal at the airport. Later, when he comes back to get her, she is nowhere to be found but Maddy hunts for her as he wants her back. The process ends up in Maddy accidentally drinking phenyl, which seems like a suicide attempt and Payal is seen once again at the hospital. So, once again starts the twists and turns of the katti-batti relationship of Maddy and Payal.

The film “Katti Batti” is about strong performances but weak script and poor handling. While Imran Khan is back with the bang, Kangana shows why she is regarded as the best today and the air they make has an amazing chemistry. But the problem lies in direction by Nikhil Advani, whose prior release “Hero” last week met the same fate because of poor script handling. He should concentrate more on the story rather than the aesthetics of the movie. The supporting cast of the movie includes Manasvi Mamgai, Vivan Bhatena and others, but none of them get the opportunity to make a display of their acting prowess. The screenplay of the movie is weak and characters half baked, as in Payal’s case, the film talks about her broken family background but has nothing to establish the fact. The songs are laborious too which makes the movie boring in parts, while the humor seems to be forced in. It seems that the talent of the actors has been wasted in this dull affair.

“Katti Batti” could not even cash on to the Kangana Ranaut factor and was a big disappointment at the box office with the meager collection of only 22.5 crore during the first week at the box office. The opening day had a decent collection of Rs 5.28 crore, followed by Rs 5.48 on Saturday and Rs 5.51 on Sunday, but the collections fell consistently over the week as the movie fetched negative reviews all over.