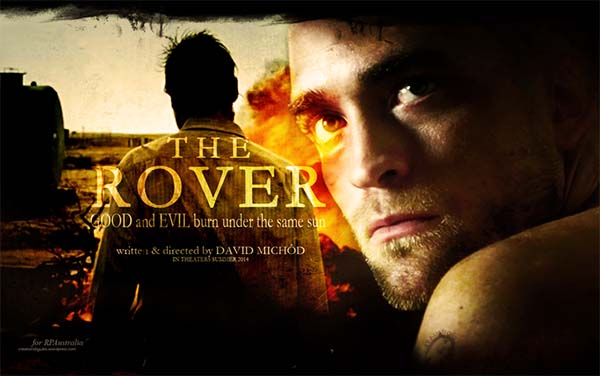 The Rover is by far the best post-apocalyptic movie since the original Mad Max. Brutal yet realistic, this character film takes one back to a journey of vengeance and destruction. Starring Guy Pearce and Robert Pattinson in the lead, The Rover, an Australian dystopian crime drama flick, released on 12th June 2014.

Set in the background of a global economic collapse, this film is about a mysterious loner [Guy Pearce] who captures the brother [Robert Pattinson] of one of the thieves of his car, when a robbery goes wrong. The perfect setting of a world falling apart in the Outback of Australia, this movie beautifully unfolds the characters in different circumstances. The scenery adds to its ‘revengeful road movie’ theme and the characters develop a somewhat uneasy bonding between themselves. The plot is minimalist, yet keeps you hooked as it is tension-filled. What’s amazing is that the film captures a very dark yet real world where governments fail, economies collapse and circumstances turn good people into criminals. Directed by David Michod of the Animal Kingdom fame, The Rover is woven with thrill, drama and action where surroundings of decaying natural beauty contribute brilliantly to the mood of the film.

Excellent performances from Guy Pearce and Robert Pattinson, and David Michod’s craft at getting the best out with intentionally focused film making is something to watch out for. Guy Pearce plays the mysterious man with flawlessness, acting almost stone-faced and stoic. Pattinson does justice to the slow-witted Rey’s character and gives his best performance till date. Critics believe that Pattinson’s personality adds to the character and suggests that the young actor is full of potential. However, the remorselessness and taciturn demeanor of Guy Pearce demands constant attention of the viewers and forms the center of the film.

The Rover’s not for everyone. The film moves at a slow pace, and at one point you may feel there is nothing happening in the plot, but this is just David’s craft at work. He keeps the film-making intentionally focused, so that the details of every scene play out well. So, even though this film may not be for everyone, especially for people who prefer fast-paced drama, viewers will relate to it on a humanistic level.

The film has gathered a generally favorable response at the box office with a decent domestic collection of $562,440 as of June 22, 2014. The Rover collected $1,107,142 worldwide and $63,302 on its opening weekend. The Rover was released in 608 theaters, earning $481,214 at an average of $791 per theater in its opening weekend. 66% of 122 film critics have given the film a positive review, with a rating average of 6.4 out of 10 according to Rotten Tomatoes. In a capsule, the summary on Rotten Tomatoes states – “Fueled by engaging performances from Guy Pearce and Robert Pattinson, the tension-filled The Rover overcomes its narrative faults through sheer watch-ability.” Definitely, this film packs a double punch, and David proves himself to be one of the most uncompromising director of his generation.