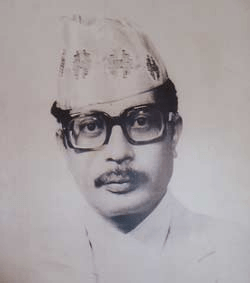 Aakha Chopi is a sentimental and one of the most melodious song by Narayan Gopal. Narayan Gopal Guruacharya is by far the most prominent and popular singer in Nepali music. The song is taken from album “Malai Nasodha”. Song talks about the situation where we have to smile even we are suffering from deep pain. This is one of the Evergreen song of Narayan Gopal.

The lyrics for this song was written by Narayan Gopal and the music was also composed by Narayan Gopal himself. Narayan Gopal is by far the most prominent and popular singer in Nepali music. When people think or talk about Nepali music, the name most associated is that of Narayan Gopal. He has sung over 500 songs, including in films, ballets and drama. Most of his songs are melodies. In recognition of his contribution in the field of Nepali music, he has received several national honors and awards; Trishakti Patta, Chinnalata Puraskar to name a few. When you once listen this song, I am sure you will keep singing it.

The music video is released officially online by sushantadhvia Youtube. Hope that you will enjoy this melodious Lok Pop song.