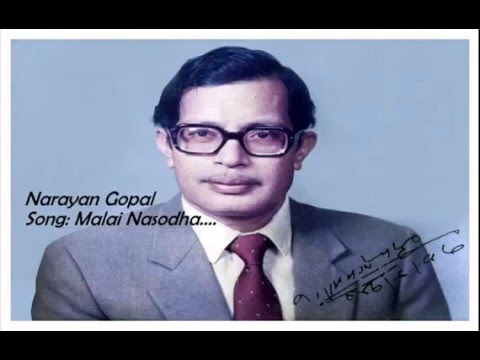 Malai Nasodha is a evergreen and one of the most loved song by Narayan Gopal. Narayan Gopal Guruacharya is by far the most prominent and popular singer in Nepali music. The song is taken from album “Malai Nasodha”. Song is full of deep meaning lyrics along with melodious and awesome music.

The lyrics for this song was written by Narayan Gopal and the music was also composed by Narayan Gopal himself. Narayan Gopal is by far the most prominent and popular singer in Nepali music. He is well known as a singer but was also an accomplished composer. His voice range allowed him to sing songs of every genre of Nepali music. His songs are often richly orchestrated with the sitar, harmonium and flute. This is also emotional and sentimental song which describe the emotional feeling of lover. When you once listen this song, I am sure you will keep singing it.

The music video is released officially online by ANGXENOWERK via Youtube. Hope that you will enjoy this melodious Lok Pop song.

Here is the lyrics for the song Malai Nasodha: